Do you want to be the next Delivering Dreams Sponsorship winner? FIND OUT MORE

The Andalusian, also known as the Pure Spanish Horse or Pura Raza EspaÃ±ola (PRE), is a horse breed from the Iberian Peninsula, where its ancestors have lived for thousands of years.

Andalusians were originally bred in Andalusia, Spain, and the breed made up the majority of the Iberian and Carthaginian horse troops that carried the Roman army in its conquests throughout the ancient world.

The Andalusian is well known for its incredible athletic ability. It has been used as a war-horse for centuries and more recently for stock work with bulls. Their ability to dodge and weave from a charging bull was noted and then used in the sport of bull fighting on horseback. The Andalusian has had a strong influence on most ancient horse breeds because of its regal carriage and high step and its ability to be powerful and elegant simultaneously.

In part because of its elegance, the breed was used as a tool of diplomacy by the Spanish government, and kings across Europe rode and owned Spanish horses. But during the 19th century, warfare, disease and cross-breeding reduced herd numbers dramatically, and despite some recovery in the late 19th century, the trend continued into the early 20th century until the purebred Andalusian almost became extinct.

Because of the extreme reduction in numbers, the Spanish government restricted the exportation of the breed. It was hoped that by doing this the breed numbers would rise and indeed, once the restrictions were lifted, the Andalusian went on to become one of the most successful all-round performance horses in the world. In 2010, there were more than 185,000 registered Andalusians worldwide. 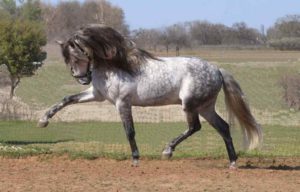 The breed in Australia

The first Spanish horses arrived in Australia in 1972. They were sent to Western Australia to live at the El Caballo Blanco (The White Horse) stables run by Ray Williams. The horses were incredibly popular and were shown off to delighted crowds who could visit the complex to see the horses in action.

One of the imported stallions was called Bodeguero and many of the present day Andalusians in Australia can be traced back to him.

In the early 1980’s the stables were moved to Catherine Fields, about an hour out of Sydney in New South Wales. The updated El Cabello Blanco was a theme park with a mini Australiana zoo, entertainment for families and a train that took passengers around the large grounds to see the sights. The main attraction was the horses, they lived in beautiful brass stables and wowed the crowds with their regular dressage shows.

The Andalusian is a well-balanced horse with great presence and substantial bone. The horse should be calm yet alert with free flowing paces. Only the best stallions and mares should be selected for breeding – with breeding, it should be all about enhancing the breed rather than breeding for the sake of it.

Temperament: Andalusians are well known for their kind and easy-going character. They have great trainability and an incredible intelligence that makes them a popular saddle horse choice.

Head and neck: A noble and attractive head in proportion to the body is desirable. The neck should have a natural arch with a good length (not too short). The neck must not have too much crest or a thick gullet.

Body: The Andalusian should have a strong but athletic body with a board muscular chest, strong sloping shoulders and a straight back.

Legs and feet: The breed is famed for its powerful yet elegant movement which comes from its strong legs. The bones must be strong but not coarse with straight forelegs – the horse should not paddle . The hooves should be strong and well-proportioned to the horse.

Colour: Most of the breed are white/grey, however solid colours are permitted. Black is rare, but bay, palomino, chestnut and dun are all acceptable colours.

Did you know? The Andalusian is thought to have been the first European Warmblood  bred from a mixture of heavy European and lighter Oriental horses.

The Saddle Hub
5.0
Bec C.
05:00 13 Sep 21
Love my new Bates saddle that I bought from The Saddle Hub! Such great service and can't wait to buy another one from here! x
Meg A.
23:00 27 Aug 21
What a fantastic service! Shae and Fiona are knowledgeable and friendly, delivery is fast and easy! Sadly, the saddles I ordered were not quite right but that wasn’t an issue - service remained exceptional, easy return process and I now have them on the hunt for other options for a hard to fit horse. 100% recommend.
Jill B.
03:23 25 Aug 21
I recently purchased a Kent and Masters cob saddle through Equestrian Hub. I did have some issues trying to complete the purchased on line but once bought everything went really well. The saddle arrived quickly and was in excellent condition. I appreciated that I had a two week trial but didn't need that long. It fitted my cobs and me really well. I loved the follow up email to check how it was going..
I would recommend Equestrian hub in a heartbeat
Allison L.
22:21 13 Aug 21
Recently purchased a saddle and i couldnt be happier. I received the saddle within days and the communication i received was above and beyond. Will definitely be purchasing any other saddles i might need through The Saddle Hub.
Thankyou
Ping J.
00:18 12 Aug 21
so happy to receive my little Stubben saddle...so easy ..so efficient..so good. thanks⚘
Michelle T.
21:28 21 Jul 21
Fast delivery on my saddle was great however, it was disappointing that there is damage that wasn’t described.
Rhiannon D.
03:34 14 Jul 21
Always go above and beyond to make sure customers are happy with their saddles . I been looking for a second saddle for ages and put in a request for the saddle hub to find one and they did so very pleased with the service and after sales customer support. I won’t shop for saddles anywhere else now
Chelsea B.
00:30 08 Jul 21
I’ve purchased 2 saddles using this service & have been thoroughly satisfied on both occasions. The saddles were as exactly described & shipping was prompt. Although Shae’s advice ensured both saddles fit perfectly, the piece of mind of a 2 week trial & return policy took all risk out of the purchase. Communication was helpful & quick & the thoughtful gifts with purchase were very much appreciated. I’d happily recommend this company 👍🏻
Peta B.
08:57 08 Jun 21
I brought a saddle from this company and couldn’t be happier with their prompt service and advise .. I would 100% recommend buying a saddle from this company if it doesn’t fit you can return it with no fuss thanks so much for your help I’m stoked with the gullet changed our saddle fit as I love our saddle 😀
Lex G.
12:50 05 May 21
I bought a saddle off Ashley, I am very pleased with it, it's in good condition and came at a brilliant price x
See all reviewsWrite a review
powered by Facebook
X