With their high-stepping action, expressive faces, strength and stamina, the Morgan horse is an extremely popular breed in America, where it was developed.

Any horse enthusiast that grew up on horse books with tales of incredible equines would know of Figure and Justin Morgan. Figure was a stallion originally given to Justin Morgan in America in th

e 1790’s to pay off a debt. While Figure was only small (14.1hh) he was strong and very successful in racing making Justin money through winnings and stallion fees – which was welcome as Justin was on a small wage working as a singing and English teacher. As a sire, Figure passed on his good nature, beautiful looks and athleticism to his foals which were referred to as Morgan horses the only developed American breed to still survive today.

The Morgan horse is directly traced back to Figure, but his exact parentage is not clear. It is thought that Figure was sired by a Thoroughbred, but he was not a full thoroughbred and his dam is unknown. Figure has influenced other major American breeds, including the American Quarter Horse, Tennessee Walking Horse and the Standardbred. Morgan horses were later exported from America in the early nineteenth century and influenced European breeds such as the Hackney. The Morgan is such a versatile breed that it was used during the American Civil War (on both sides) and was so well thought of that in 1907, the US Department of Agriculture established the US Morgan Horse Farm in Vermont with the purpose of improving the Morgan breed. There are thought to be more than 175,000 Morgan horses worldwide. 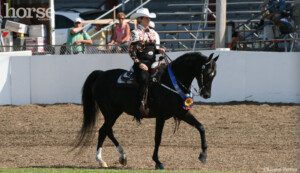 Breed traits The Morgan has strong legs, an expressive head with large eyes and a broad forehead. It has a high wither, short back, naturally arched neck and well-muscled croup. Morgans are strong and stand between 14.1 and 15.2 hands high with an animated and elastic trot and canter. Some Morgans are gaited, which means they have a speed in between trot and canter which can either be the rack, foxtrot or pace. The breed is also known for its stamina, intelligence and courage.

Colours of the breed The more common colours are bay, black and chestnut however, grey, roan, dun, silver dapple and cream dilutions such as palomino, buckskin, cremello and perlino have also been noted. In addition, three pinto color patterns are also recognised which are sabino, frame overo and splashed white.

Disciplines The Morgan can do everything with ease, be it dressage, show jumping, western pleasure, cutting and endurance riding. They are also used as stock horses and for pleasure riding and driving. Their willing nature and easy handling makes them a pleasure to train and take to competitions.

Find awesome listings near you!